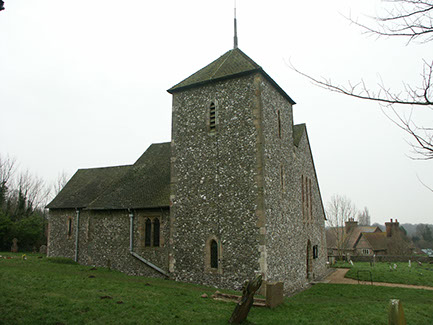 Clapham Church was built in the 12th century, replacing an earlier Norman building. There are continuous records of the Rectors of Clapham from 1257, (link to download the list of Rectors), when William de Radenore was appointed; the parishes of Clapham and Patching were combined in 1875, and then joined with that of Findon in 1982. Although Clapham appears in the Domesday Book, the church itself is not mentioned; the earliest document which names the Church of the Blessed Virgin Mary at Clapham is dated 1405.

The church is small, with a plain exterior. It has a low-pitched roof on the tower; it used to have a spire, but this was removed in 1790. The church has undergone many changes over the centuries; you can just see the last remains of the older, Norman church in the walled-in window on the North side of the nave. The only remaining 12th-century structure is the South wall of the tower. The outside walls are 13th-century.

From the outside, there are signs on the South side of what may have been an additional side chapel; there is also the remains of a low window, which legend has it was a 'leper window', through which lepers could watch the service without infecting the congregation. It is certainly true that Lee Farm was a leper settlement in the Middle Ages, and the path from the church to Lee Farm used to be called the 'leper path'.

On the inside, the chancel is not in a straight line with the nave; one theory goes that this was deliberate, and was supposed to imitate the angle of Christ's head on the cross. An extremely ancient gravestone with a cross carved on it, which may be 12th-century or even earlier, has been moved from the churchyard to the wall of the vestry.

There were many changes in the 15th century - Clapham must have been a prosperous parish in those days! All the windows were replaced, the original door on the South side was blocked up and new West and North doors made. The church was restored by Sir Gilbert Scott (architect of St Pancras station and restorer of many churches) in 1873-4, and many details were put back to their original state. He also found an early 17th-century painted inscription of the Ten Commandments, covered with layers of whitewash, above the chancel arch. There was also a 19th-century gallery at the West end, which he removed.

The tower - which has no staircase - contains three bells, which were last rung for the Queen's Golden Jubilee in 2002. Each of the bells has a name: Jacobus, Catalina and Margarita Katerina. It is thought that they were probably originally cast in about 1315. However, they have been repaired many times; the wheels on which they turn date from the 16th century, and were repaired in the 19th. In 1982 the bells were found to be in danger of cracking; they had to be sent to Loughborough to be repaired, but they were back in full working order by 1986. They have even been rung by a single person - one for each hand, and one on the right foot!

The Church has an exceptional collection of 16th-century brasses and monuments, in memory of the de Michelgrove and Shelley families; many generations of children from the school have enjoyed making brass-rubbings of these. Some of the brasses show religious symbols which would have infuriated the reformers during the Commonwealth; they were probably buried for safekeeping, otherwise, they would not have survived.

The other pride and joy of the church - though of much later date - is the set of tiles behind the altar, depicting the four Archangels. These are from the workshop of William Morris, and are believed to have been made by Morris himself. 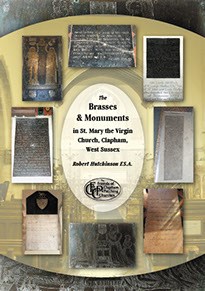 Robert Hutchinson F.S.A has written a short account of the brasses and monuments in Clapham Church, which have been described as 'the best collection in West Sussex'. Follow the link.