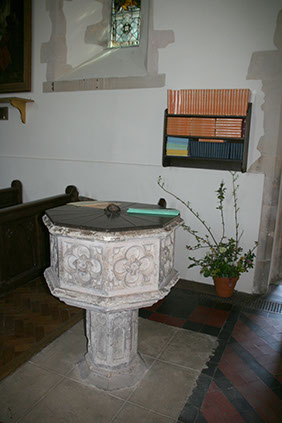 From the outside, the church is typical Sussex: flint walls, stone dressings and a tall, shingled spire, and Early English Gothic lancet windows throughout. Inside, the nave is wide and barn-like, with a magnificent, original roof. But what catches the eye is that the chancel arch is off-centre, with the nave apparently pushed to the left.

Just before the chancel arch to the left is an archway to what is now the north transept, but is actually beneath the tower, and there are also arches to the east and west, all with shafts in classic 13th century style.

The chancel is entered through an impressive Victorian screen, and has two lancets in the East End with a small Oriel window above, and a fine piscina with stiff-leaf capitals. The carved reredos is a modern addition.

Furnishings include a very fine octagonal 15th century font, with quatrefoil panels enclosing rosettes, and a 19th century pulpit incorporating 16th century arabesque panels. On the floor beneath the tower is a fine 18th century memorial, to Mary (d. 1737) and Robert Bushby (1739).

In the late 17th century the church was badly decayed and in danger of falling down. In 1703 after the roof collapsed parishioners demolished the decayed west and north walls. The north wall was rebuilt 4 foot to the south. This is why the pews on the north of the nave (main church area) are shorter than those on the south and the aisle is not central. The cost and poor availability of timber was the reason for moving the church wall, thus undamaged sections of the original roof timbers could be trimmed and re-used.

The south door through which you entered the church, would have intersected the south wall but the rebuilding of the west wall in the present position shortened the nave and left the door in the south west corner.

There is evidence of a sun clock outside the porch through which you entered the church. To the right of the entrance, on a stone to the right of the top of the pillar that supports the stone arch, a hole approximately 1cm in diameter can be seen. This is where the gnomon would have been secured.

Careful inspection below will reveal a semi-circle of smaller indentations which would have depicted the time of day as the shadow of the gnomon moved.

Such a sun clock is very rare. Unfortunately, it would not function today as it is shaded by trees.

According to the Diocesan Kalendar of 1890 this 15th century font which was described as being of  'a very poor and common type' was discarded and replaced by one which was 'modern'.

In the early 19th century, having reputedly been used as a feeding trough for farm animals, this old font was restored and replaced in the present position.

The lancet on the right shows a figure of St John with a pen in his hand and an eagle which is a symbol of St John, holding an inkwell in its beak. The words are from the revelation of St John the Divine, Revelation Chapter 14 verse 13,  'Then I heard a voice from heaven say, "Write this: Blessed are the dead who die in the Lord from now on.'

The war memorial, placed below the west windows names those parishioners that died in the Great War.

The collages on the north wall depicting Christmas, Easter and the Ascension were made by the Clapham and Patching Women's Institute sewing group and were presented to the church in 2006.

From the west, going towards the front of the church the lancets depict Jesus and the disciples at the Transfiguration, the Passover supper and Jesus with fishermen.

The painting on the south wall was donated by a Mr. Noel of Dulaney House, according to whom the copy of Rubens 'Descent from the Cross' is by a Belgian artist.

Opposite on the north wall is a painting in the style of Murillo, believed to be of Saint Paul (right). However the cat like figure in the picture may represent the winged lion which is the symbol of St Mark. This painting was loaned to the church in 1971 by Mr. H Williams of Seldon Court. It was later restored and presented to the church by his son.

The painting (left) in the Lady Chapel which is a copy of Murillo's Madonna and Child, reputedly came from Florence. The lancet above also depicts Mary and baby Jesus.

There is a single bell which is rung before some services.  The south tower arch at the entrance to the bell tower is of 13th century origin but appears to have been repaired at a later date. The east and west arches had at some stage been blocked up, presumably when the structures into which they led were demolished. They were re-opened in the 1889 restoration.

The eastern arch now leads into the 19th century vestry and organ chamber. The west arch is smaller and leads to a Victorian porch but the original purpose of the west arch is a mystery. A faculty (permission to undertake work) application in 1888 referred to plans 'to build an entrance porch or to restore the former aisle to the west of the tower'.

Strangely the faculty wording indicated that there was evidence of a former aisle, a side aisle, to the west of the tower. Did the west arch lead into that aisle? With an internal dimension of 5' 8" wide it is larger than any aisle would have been, given that the north wall was only 4' 6" further out before 1730. This remains a mystery.

More easily seen from outside, this was part of the 1889 restoration. This broach spire is a design that allows an eight sided spire to stand on a square tower.

Situated at the base of the tower the altar in the Lady Chapel is an ancient wooden table. Could this be the wooden Communion Table that was introduced when stone altars had to be discarded after the Reformation of 1547?

The moon and stars painted on the Lady Chapel ceiling are believed to have been there since medieval times.

High on the west wall of the tower is a carving of Ann Dulany of Dulany House, known for her works of 'charity and mercy': in 1835 she died at the age of 42. The memorial was provided by her daughter Ann Dulany Hunter whose husband Sir Richard Hunter generously contributed to the restoration of the church and the building of the Patching rectory in the same year, 1835. A tablet commemorating these events and dated 1835 was found under the choir stalls. Further work was done in 1856 by Sir Richard's kinsman, Sir John Kirkland.

The memorial inscription on Anne Dulany's carving, 'Deeply imbued with the principles of Christian truth, and resting in humble thankfulness on the supports and consolations of the Gospel, She resigned her soul in peace in the steadfast hope of blessed resurrection through the merits of Christ her Saviour'.

The pulpit dates from the 1889 restoration. It incorporates three Renaissance arabesque panels of 16th century origin.

Little is known about the large wooden cabinet in the south transept. It appears to have been constructed incorporating earlier carvings.

The wooden screen added in 1889 is in the style of the 15th century screen which it replaced. There are four panels each side of the door. Each solid panel and open bay has a cinquefoil head, a design of five converging arcs.  The cornice and cross have gilded flower ornamentation.

When viewed from the altar the scalloped stone work that supports each base of the chamfered chancel arch is visible. This is considered to be a very fine example of what is often referred to as 'Clymping corbels.' (A corbel is a protrusion from a wall that supports an architectural feature).

The pointed arch on the north side of the chancel is in 13th century style but must be part of the 19th century restoration at which time the organ was moved here.

The doorway leads to the vestry. There is one lancet on the north wall bearing the inscription: 'An angel strengthening Him'.

The lancets on the south wall from the east are inscribed,

1. 'Behold the man,' the words of Pilate as he brought Jesus before the crowds

2. 'He that saw it bare record,' soldiers casting lots below the cross

At one time there was a priest's door between the second and third of these lancets.

The distinctive tiles in different patterns for the chancel, sanctuary and altar step are identified as Minton tiles in an account of the 1889 restoration.

The Minton Company of Stoke on Trent existed from the late 18th century until the 1990s when it became part of the Royal Doulton company.

From the chancel screen the Latin words cantares and cantant are carved, one at each end of the choir stall on the left. Similarly the words domini and domino appear on the stall to the right. The translation is, 'sing to the Lord' in which we are very pleased to be led by our choir at Sung Eucharist.

Of the large lancets behind the altar the one on the left depicts an Angel and Mary Magdelene and is inscribed,  'He is risen'. The inscription on the lancet to the right is: 'My Lord and my God.'

Between the lancets are symbols of the crucifixion; wooden cross, nails, crown, sponge on a reed and spear. Below the canopy are the letters INRI, the initials of the Latin words written on the cross, Iesus Nazarenus Rex Iudaeorum, (Jesus of Nazareth, King of the Jews).

The impressive Victorian reredos which is situated behind the altar has a central angel. To the left is the triumphant procession towards Jerusalem showing Jesus and disciples with supportive crowds waving palms. On the right is a very different picture of Jesus carrying the cross towards Calvary with soldiers ahead, one kneeling woman and others following.

12. The Piscina and Sedilia

The trefoil headed recess to the right of the altar must at one time have been a piscina which is a water-drain in the form of a shallow basin to drain the water in which the priest washed his hands, as well as that with which the chalice was rinsed at Communion.

Close inspection suggests that the basin was filled in to make a stone shelf which is now used as a credence table. The recess also houses the aumbry where consecrated communion wafers are stored.

To the right of the piscina is a stone 'shelf' or sedilia, from the Latin sedile which is a single seat, sedilia being plural. This double seat was for the use of officiating priests. An entry in the Diocesan Kalendar for 1890 says,  'A very beautiful and nearly perfect piscina discovered in the wall was restored and sedilia in consonance with it built.'

There are bats resident in the church. Though rarely seen their presence can be obvious around the church at times!